The socialist one-party state of Vietnam is under the leadership of the Vietnam Communist Party. The governing body is comprised of two main sections – the General Secretary, Prime Minister and President, and the National Assembly. Both the President and Prime Minister hold special powers regarding the nomination and suspension of Cabinet members, but they do require approval from the 498-member National Assembly.

As the National Assembly is endowed with immense authority, Vietnam has adopted a dual judicial structure where the Supreme People’s Court responds to the general population and the Supreme People’s Procuracy supervises and controls the obedience of all the organs of power in the state.

Social stability – Vietnam, for the most part, is considered a peaceful state with high social stability. The state experienced only one major protest in the last decade as a response to China deploying an oil rig in a disputed region of the South China Sea. This was a nationwide riot that went on for two months until China decided to move their oil rig to a different region.

In recent years, however, due to increased internet penetration, Vietnam has become more susceptible to social instability with a rise in theoccurrence of hate speeches. To try and maintain social equilibrium, the government has decided to filer online content and place laws regarding social media usage.

Political stability– Vietnam is characterised by high political stability, partly due to the one-party system of government. The structure of leadership does not entertain any dissent, but one cannot claim that there is a complete lack of internal conflict. However, there were high-profile cases of corruption between public and private sector dealings such as such as buying private utilities at an inflated price or even selling state property at a loss, thereby leading to several former cabinet ministers coming under judicial scrutiny. Due to the 1991 Administrative Detention Decree, internal disputes have significantly decreased. The increased political stability is shown in the graph below as Vietnam has a higher rank than its regional peers in spite of being such a young nation. 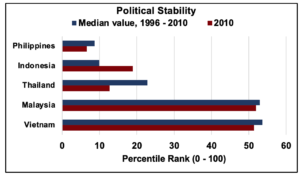 Religious stability–As mentioned earlier, Vietnam practices secularism, thereby allowing freedom of religion for all. However, the nation recently introduced measures restricting freedom of religion solely to protect the Vietnamese minority groups from the growing Hmong Christian population. Furthermore, Vietnam went against the UNHRC with the defence that they were only upholding state laws even though these laws are currently threatening roughly half the population of Vietnamese citizens. Therefore, it would be fair to assume one would have to be wary of sectarian violence should they be a Christian in Vietnam.

Government Priorities
The key focus areas of the Government are as follow:

Key sectors to look at

The Rice Bowl of the Region

Foodies Around the World Love Pho