The constitution of 2017 provides for the direct election of members of the lower house of the Assembly, the House of Representatives, to four-year terms, five-sixths from single-member districts and the remainder based on proportional representation from the political parties. It also requires the prime minister to be a member of the House of Representatives. Members of the upper house, the Senate, are directly elected to six-year terms.

Legislation originates in the House of Representatives, but it can be modified or rejected by the Senate. The execution of laws is carried out by the civil service, whose members are known as kharatchakan or “servants of the king.” It is also important to note that the bureaucracy, particularly the ministry of interior, has always enjoyed a significant degree of autonomy in administering the country.

Social and political stability – In May 2014, following a military coup, the 2007 constitution of Thailand was suspended (except provisions pertaining to the monarchy), and a council of military leaders took power. The council appointed a 200-member single-chamber interim legislature in late July 2014. The leader of the council, Thai junta chief Prayuth Chan-ocha, was named interim prime minister in late August 2014.

The military rule, which extended over a five-year period, finally came to an end in 2019 after Chief Chan-ocha was picked to become a civilian Prime Minister post a March 24th election held in the country. The order to end military rule, however, did not strip away the power to let security forces carry out searches and arrests unchallenged. With restrictions on media coming to an end and civilian cases being transferred from military to civilian courts, a sense of democratic normalcy will hopefully seep back into Thai society and mark a new dawn for the country.

Religious stability–Thailand has traditionally been considered religiously tolerant but the last few years have seen sprouts of conflict and turmoil in various parts of the country. As of 2015, the country’s three primary religions were Buddhism, Islam, and Christianity with almost 95% of the country’s population practising Buddhism, and only about 4% adhering to Islam – with a large concentration in the country’s southernmost provinces. This region of Thailand has been historically turbulent with bouts of violence by separatist militia and unfortunately there has been a resurgence of such violence since 2017.

Thailand has also witnessed rising intolerance from certain sections of the Buddhist community. This is evidenced by the participation of the Pandin Dharma Partyin the country’s 2019 elections. By preaching that “Buddhism is under threat” this political party has tried to rally support against secular authorities they accuse of harassing monks and of caring more about Thailand’s tiny Muslim minority. While said intolerance has not showcased itself in the form of physical violence, rising Buddhist nationalism is considered a matter of national security by the government’s National Office of Buddhism. To read more about this issue, follow the link below: 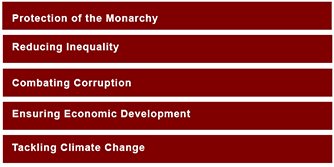 Geographic Advantage
As seen in the image below, Thailand occupies a strategic location in the heart of ASEAN and is, therefore, connected with the fast-growing CLMV (Cambodia, Laos, Myanmar and Vietnam) countries, making it an ideal location for businesses and business investors as it would grant them easier access to the surrounding emerging markets. Moreover, the powerhouse economies of nearby China and India are also easily reachable from Thailand by virtue of its world-class transport infrastructure, which further provides great opportunities for cross-border trade and investment. 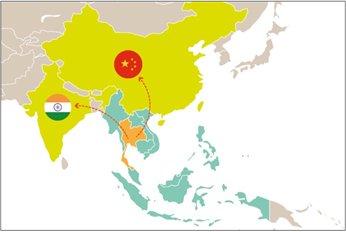 Thailand, Where the Government Is Wooing Investors