Government Structure
Myanmar has a parliamentary republic system of governance with substantial political power with the military, also known as Tatmadaw. There are two legislative chambers- the 440 seat Pyithu Hluttaw (People’s Assembly, the lower house) and the 224 seat Amyotha Hluttaw (Nationalities Assembly, the upper house). The National League for Democracy government took office in April 2016 under the leadership of Aung San Suu Kyi. She is the de facto leader of Myanmar, holding positions of state counsellor, president’s office minister, and foreign affairs minister. The current president of Myanmar is Win Myint. Currently, the President appoints a Chief Minister for each State and Region. Each State/Region has a unicameral legislative assembly (Hluttaw), but laws passed by the Union Legislative Assembly (Pyidaungsu Hluttaw) are superior to those passed at the Regional/State level. The Constitution puts in place a governance structure that, to some extent, gives effect to the separation of powers principle. A Constitutional Tribunal can determine whether measures taken by the executive authorities of the Union, States, Regions and self-administrative areas are in conformity with the Constitution.

Social and political stability –Myanmar has one of the fastest growing economies in Southeast Asia. The explanation for this rapid economic growth is the country’s young population that helps ensure high growth in consumption and income. Myanmar has the greatest power-sector investment needs among the countries of Southeast Asia. Agriculture is the biggest contributor to GDP and employs over 65% of the population. The Government adopted Myanmar Sustainable Development Plan to tackle the more difficult second-generation reforms needed to sustain the economic transition. The human capital is limited in Myanmar hence unless it invests in its people, it will not be able to maximize economic growth. Progress is needed for peace and civil liberties to offer economic opportunities to all and maximize growth and shared prosperity in Myanmar.Suu Kyi’s legacy as a political leader hinges on two great challenges: securing a lasting peace with ethnic armed groups and brokering a power balance between the civilian government and the military.

After five decades of autocratic military rule,  Myanmar has initiated a critical transformation to representative democracy. But various regional and national tensions threaten the already tenuous transition; the Rohingya crisis, on-going clashes between ethnic armed organizations and the military in Kachin and Shan States, disagreements between the military and elected civilian government, intercommoned and religious cleavages, and precarious security structures threaten the nation’s stability. This has over the years hindered the growth of the country. In Rakhine, Human Rights Watch and United Nations observers have cited widespread atrocities committed by security forces. Although it previously suspended sanctions, the EU has retained an arms embargo on Myanmar over concerns of internal repression.

Religious stability –Religious institutions have long traditions of providing important services in Myanmar society, especially in education, health services and welfare support, including humanitarian assistance to displaced persons. The strong and complex links between Buddhism and politics in Myanmar have underpinned the recent re-emergence of Buddhist nationalism.

The Rohingya people have faced decades of systematic discrimination, statelessness and targeted violence in Rakhine State, Myanmar. Such persecution has forced Rohingya women, girls, boys and men into Bangladesh for many years, with significant spikes following violent attacks in 1978, 1991-1992, and again in 2016. Yet it was August 2017 that triggered by far the largest and fastest refugee influx into Bangladesh. Since then, an estimated 745,000 Rohingya—including more than 400,000 children—have fled into Cox’s Bazar.

Geographic Advantage
Myanmar since early ages has enjoyed the benefits of its strategic location. Myanmar connects India and China through a land route, which together form a major chunk of the global market. 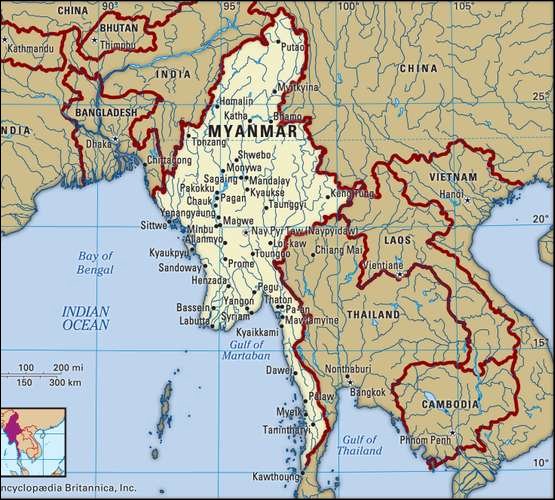 Further Myanmar connects the People’s Republic of China with Southeast Asia. Myanmar has been blest with the facilities of both using waterways as well and road transportation. As a result of this trade contribution to Myanmar’s GDP is the second highest at 18.4%. 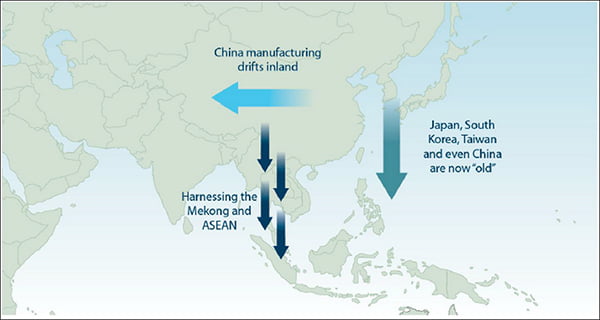