Ease of Doing Business and Corruption

Perceived Transparency Ranking – Indonesia has long been rated as one of Asia’s most corrupt countries. Since independence, Indonesia has been ruled by two dictators, Sukarno and Suharto, and a culture of cronyism and favor seeking was allowed to foster. In 1998, Indonesia became a democracy and people were allowed to vote for their President. In 2014, President Jokowi came to power on the promise of running a clean administration, and he has now won a second term. President Jokowi has amongst the cleanest reputations of any leader in the world today and he has ensured that his administration is one of the cleanest and least corrupt in Indonesia’s history. When he selected his cabinet ministers for his first term in office, he had each Cabinet minister vetted by the Anti-Corruption Agency and anyone who was not considered clean enough was not offered a ministerial position.

Currently, Indonesia is ranked 85th in Transparency International’s Global Corruption Perceptions Index. While there is a lot more work to be done in this space, the country has made huge headway in this area and its position has improved by 11 spots in just the last two years. We expect to see continued improvement in this area but there are many forces who are resisting change and overall change will come about slowly.

To find out more on Indonesia’s transparency scores over the years, click the link below:

Ease of Doing Business Ranking – Indonesia’s ranking in the World Bank’s Ease of Doing Business Global Index used to be 124 in 2016 but this became a priority for President Jokowi, who asked his team to focus on this and improve Indonesia’s score. Accordingly, this ranking has now improved to 73rd.  While this is comparable to some ASEAN emerging markets like Philippines and Vietnam, it is far behind the rankings of other peers like Thailand. There is therefore more work to be done in this space. The current Government is now focused on passing a mammoth Omnibus Law which will significantly help to make it easier to invest and do business in Indonesia. We will need to see if this bill passes Parliament. 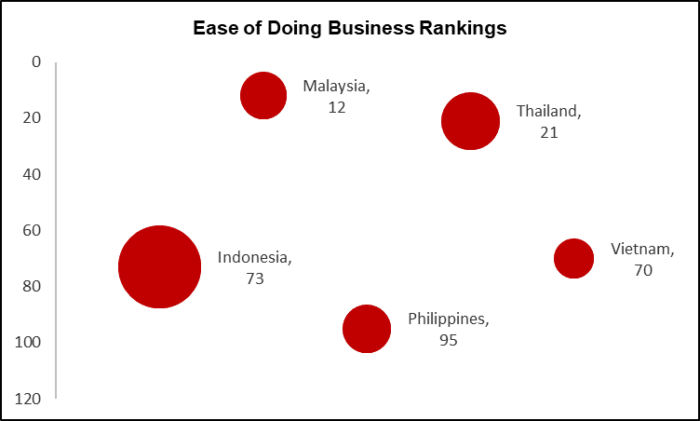 Combating corruption – Indonesia has traversed a long journey in its fight to eradicate corruption, however, there is still some work to be done. A testament of the government’s hard stance against corruption, is the work done by the Corruption Eradication Commission (KPK). Established in 2003, the KPK has successfully handled several corruption cases between 2005 and 2016:

IPRI Ranking – Indonesia ranked 65 out of the 129 countries that were included in the Intellectual Property Rights Index.