It is going to be two years since COVID-19 in about less than two months and it is not more relevant than now to look at tourism as the “responsible holiday or travel” season approaches us. Reportedly there have been announcements of reopening of ASEAN’s islands for tourism, but can the region afford to? The region is not new to a setback in travel and tourism – but the impact as the COVID-19 was unprecedented. Epidemics or natural disasters in the past like the Tsunami (2004) or SARS (2004-05), Cyclone Nargis (2008) or Avian Influenza (2012-2014) have impacted business, but the dependence on international tourist was much smaller at 51 million international tourists at the early part of the century which doubled a decade later. 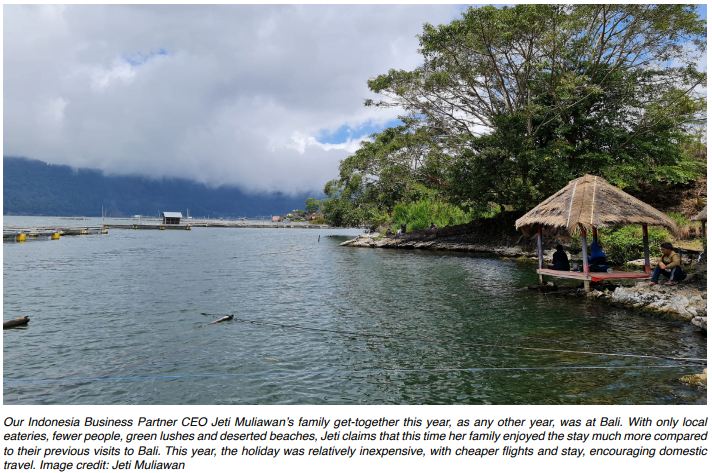 Close to a fifth of ASEAN population was the number of international travellers at 144 million, who visited the region in 2019. COVID-19 further reduced the number of visitors by a fifth. The pandemic put the brakes to all the planned growth for the travel and tourism industry across the globe and in South East Asia.

Come to think of it, natural disasters have had a larger impact with visitors avoiding the location, but the impacted location to be re-built as well. But was the impact of COVID-19 as devastating as we thought it to be?

Anecdotal evidence suggests that the luxury suites in the highend resorts were the first ones to be sold out, as they doled out the offers to attract tourists but had many takers as well to meet the pent-up demand. Furthermore, with the work-from-home translating to work-from-anywhere, many moved out of crowded Jakarta / Manila to travel local places.

Airbnb, the world’s leading short term rental platform, particularly has had a strong rebound with the combined strategy of focusing on domestic tourists and with customers seeking nearby rental properties to take a break from months of working from home. This trend has been observed far higher in North America as compared to South East Asia, but has contributed significantly to Airbnb turning in profitable in the quarter ending 30th September.

The more tourism dependent Thailand (22% of the GDP and largest employment sector) suffered a far larger impact of the pandemic. With 40 million tourists in 2019, the domestic numbers were far too small. This has resulted in economic distress which is visible in Thailand, shuttered shops, long queues for food handouts, and crowds of angry, unemployed young men in the anti-government protests. The country would definitely want to diversify to a larger array of sectors as it rebuilds its economy and reduce its dependence from this sector.

This reduced impact on tourism in the countries like Vietnam and Indonesia, which are newer tourist destinations, some may argue could be distorted by the economic impact of COVID-19. As the economies across shrunk as an aftermath to the COVID-19 impact, we also are aware that the income gap has actually become more pronounced. The rich have actually gotten richer and the poor, poorer. The travel and tourism industry caters to the rich and therefore was not affected by this change.

In fact, Indonesia is trying to capitalize on this high-end tourism. It attracts fewer tourists who spend more on luxury trips than typical mass tourism experiences. This, the government believes reduces environmental impacts while increasing economic benefits. There are detractors to this hypothesis, but in reality, we have seen greater biodiversity getting added to the environment around us as a direct outcome of the pandemic and reduced human interference.

But all that is the past and the present of 2021 with an extended hangover to 2022. Going forward, what could be the potential challenges to this industry given that COVID-19 has significantly changed all of us? We all are accepting that we have to live with COVID-19 and that this cannot be wished away. Living with COVID-19 means higher awareness about:

Hygiene – Most significant change that has happened to us humans, the paranoia about cleanliness. This will be a non-negotiable as we very cautiously step out, especially if it is a family travel with unvaccinated kids.

Home crowd – The import of domestic tourist has been established through the pandemic, were the saviors to the tourism sector. Given that regulations could potentially change at short notice, domestic crowd will continue to reign and be a large part of revenue contribution.

Humble locations – Smaller, humble locations would gain traction rather than the mainstream locations as people would try to avoid crowds. This increases opportunity for a wider set of locations but the more popular destinations may not get to the high benchmarks.

Hybrid Corporate – A dated report (2204, Sharma UNWTO) states that 30% of international travel was Business travel. Estimating that this spills over to domestic as well. The pandemic has taught us that business meetings can be conducted virtually. Given that the hybrid work culture means that people are not even going to their offices, travelling for business is definitely set to change. However, again given that hybrid work culture may be the future of the work-place, bonding between teams, building a corporate culture may be through the offsites. These two opposing trends will definitely have a negative impact on the overall travel for business, the quantum yet to be decided.

Heighten revenues – The service providers in the travel and tourism industry had to diversify to heighten their revenues. Be it souvenirs for sale online, or supplement income via farming or as a delivery person for online platforms, building the resilience by expanding their services was a quick lesson learnt for survival, and unlikely to be forgotten in a hurry.

Learning new things, enjoying new experiences, seeing new places energizes people to embrace the monotony of their familiar and predictable regular life. Especially, the pandemic has deeply reinforced the joys of travel after being jailed in the house, we know what we were missing! As travel restrictions ease, tourism is slated to pick up and rebuild.