Strap: Escalating violence is leading to heightened tension in the region, even as the junta is facing tough resistance. 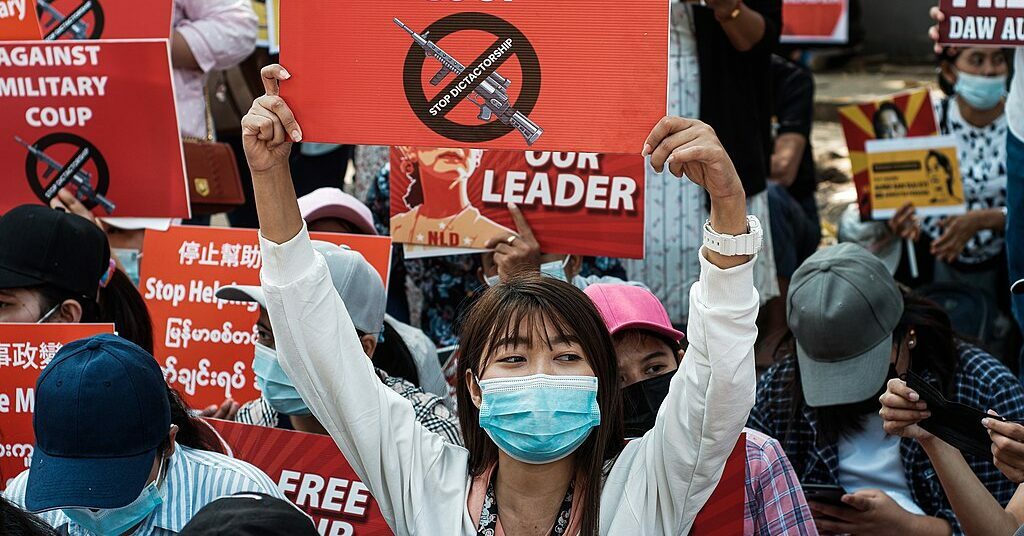 A year after the military junta took over power in Myanmar, there is a state of uncertainty. The forces have reneged on the promise to restore democracy in the country, while the citizens continue to protest. This has severely affected the economy.

Construction, garments, hospitality, and tourism industries are among the worst hit. Large corporations such as Chevron have announced an exit from Myanmar amidst escalating violence.

The situation at present is grim. Myanmar is on the brink of an economic collapse. The foreign debt stands at $11 billion, with low reserves inhibiting repayment. Myanmar’s economy contracted by 18% in the financial year that ended in September 2021. The World Bank projects a 1% for the year ending September 2022.

How did we get here?

In the November 2020 elections, pro-democracy leader Aung San Suu Kyi won the elections. But the military, or Tatmadaw as it’s locally known, wasn’t convinced. Army general Min Aung Hlaing warned ‌the army could revoke the constitution. And on February 1, 2021, the Tatmadaw seized power from Suu Kyi. She and several senior leaders of her party are under arrest.

Following this takeover, there was a nationwide crackdown. Widespread protests continue in Myanmar. Now, the opposition to the regime is more organised and better armed.

Key roads and arterial regions are being impacted by the civil war, from Mandalay to Kachin.

Violence continues, undeterred. Estimates suggest that 1,350 civilians have been killed in Myanmar since February 2021. Internet shutdowns are widespread and are being used as a measure to control dissent.

A slew of companies, including Voltalia, Posco, TotalEnergies, and Chevron, have decided to exit Myanmar to avoid getting tangled in the violence.

Locally, there is a currency crisis brewing. Myanmar’s central bank has now decided that foreign currencies won’t be used for domestic transactions. This is to minimise exchange rate instability. Alternative payment systems, such as the one used in Russia, are being explored.

However, with tourism picking up, there is some glimmer of hope. Domestic travellers have fueled a business boom for hotels, even as international tourism is yet to recover. Amidst this, international flights have resumed and Covid testing requirements have been relaxed.

Meanwhile, Myanmar is gearing up for “free and fair elections” in 2023. The UN has called this a ‘preposterous’ promise.